SIELC Technologies introduces a new type of mixed-mode separation media. By further improving on mixed-mode methodology, a new generation of separation media was developed. This new generation of columns offers a significant step in obtaining a universal platform for all types of small molecule separation. Previous generations of the mixed-mode media suffer from such limitations as restricted use of methanol in the mobile phase, poor peak shape, low efficiency for multi-charged molecules, high buffer concentration requirement and poor retention of non-charged molecules. All these limitations have been overcome with the Newcrom stationary phase.

The new surface chemistry is based on the idea of moving the charged embedded functional groups as far from silica gel surface as possible. 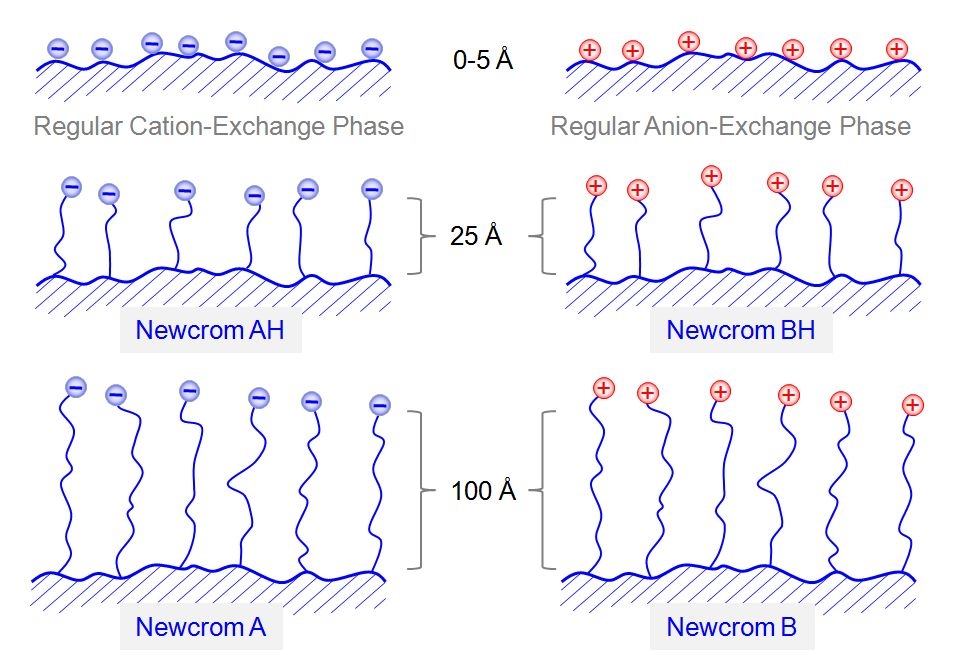 This was achieved by attaching a long alkyl chain to the silica gel surface and placing an ion-exchange group at the terminal end of this chain.  As a result, the ion-exchange functional groups have high mobility inside the pores of the solid particles. This eliminates the chelating (trapping) effect observed with multi-charged analytes on a surface of traditional ion-exchangers. The embedded ion-exchange groups in Newcrom behave as ions in a solution, not as ions on a surface. While highly mobile, they can not go beyond the length of the ligand chain.

Chromatography related to ion-exchange process thus still takes place. Ions of opposite charge can be retained and separated based on their charge, ion size, and polarization ability.  Also, reverse-phase nature of the stationary phase allows ion separation based on their hydrophobic properties, charge position in the molecular skeleton and isomeric structure of none-charged part of the molecule. 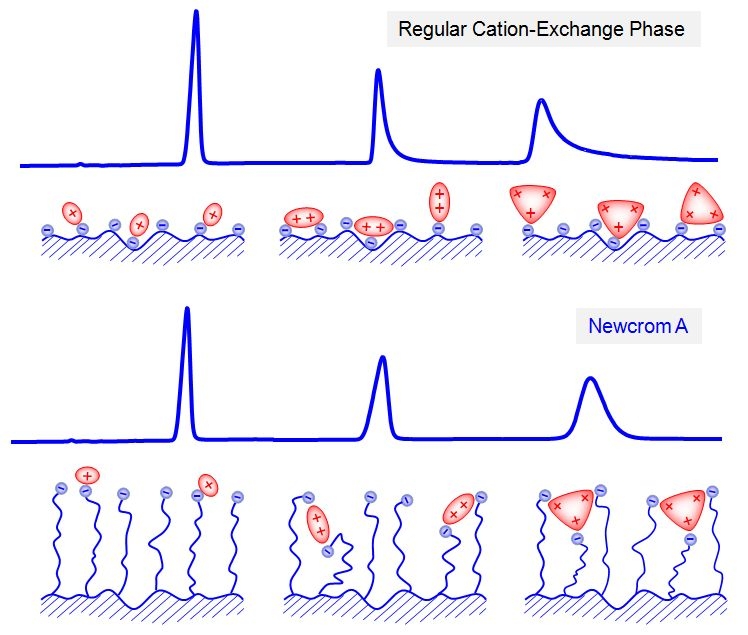 Additional benefits of these stationary phases are low concentration of buffer in the mobile phase needed to generate efficient ion-exchange. Some amount of formic acid (HCOOH) in the mobile phase is all that’s required to generate efficient ion-exchange process. For low UV applications, small amount of phosphoric acid (H3PO4) works as an efficient mobile phase ionic modifier. Yet another benefit is very short equilibration time for switching from one buffer to another, while on older ion-exchange columns the equilibration usually takes many column volumes to get stable retention.

Methanol and acetonitrile, as well as any of their combination can be used to change selectivity of the separation